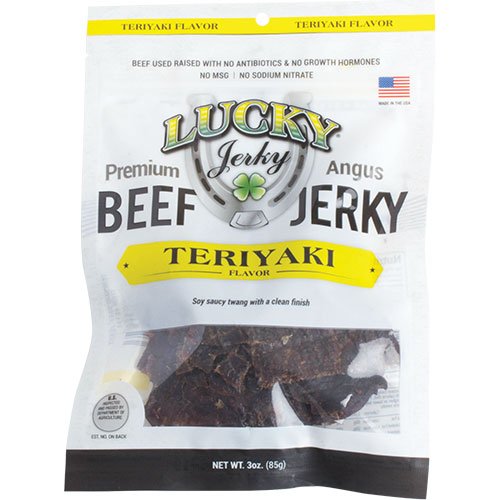 Nebraska Star Beef "Lucky" Brand Natural Angus beef jerky is gourmet beef jerky. It's made in small batches (they never exceed 200 lbs.) by skilled artisans in Nebraska. We grow all of our own beef so you know that you're getting a consistent, quality product from a small family business that cares about what they produce. Teriyaki flavor is a traditional flavored jerky. It's sweet and tangy taste is irresistible and if you are a traditional jerky buff, it will not disappoint. This product contains no MSG, Sodium Nitrate/Nitrite, antibiotics, steroids or added gluten.

We have made our living in beef for the past 4 generations. We like to believe we’ve learned a thing or two about eating beef in that time. A while back, we developed 'Signature Seasoning' for our Nebraska Star Beef products. It being some of the best steak seasoning that we’d ever tasted, we thought it was only natural to give it a shot on our beef jerky. The results were as we expected and 'Original' became our second beef jerky product. Original flavor accentuates the flavor of our all natural beef, it’s got sweet tones with just enough spice to make it interesting. It’s not heavy on salt, but we use some to help pull all the flavors together. There are light notes of onion, garlic and celery. It pairs equally well with your favorite beer, wine, soft drink or water.

*We do not use MSG, Sodium Nitrite, or Potassium Sorbate in this product, and the beef used in this product is raised without: Antibiotics, Growth Hormones, or any other drug treatment.

Our story begins in Nebraska shortly after Nebraska became a state in 1867. Like many families, we stopped our trip short in the fertile Platte Valley and put down roots.

Raising cattle has always been our first love but we are no stranger to raising corn to keep our cattle fed. Over the years we’ve weathered storms that both mother nature and the stock market have sent our way. We are Nebraska Cattlemen and we are proud of what we do and have built. When you buy steaks from us you’re also buying a piece of our heritage and history that is as old as the home of premium beef, Nebraska.

Our beef is raised, aged, and butchered the traditional way, each steak is hand cut and trimmed – one at a time. Our focus is simple and narrow: Produce the absolute highest quality humanely raised, antibiotic free, hormone free beef available.

We are sad to learn of the passing of Ken Thomas, the legendary record producer who worked with David Bowie, Queen, Public Image, The Cocteau Twins, Sigur Rós and M83. Ken produced Gavin Friday’s album ‘catholic’ in 2011. Our thoughts are with his family. Gavin: “Ken Thomas was an extraordinary man. Such a talent, a…

Gavin Friday and Howie B have recorded the song “Death on All Fronts (America is Falling)” for the Allen Ginsberg Tribute album The Fall of America, A 50th Anniversary Musical Tribute. A benefit for HeadCount.Org, the album is dedicated to Hal Willner. Musically Interpreting poems from Ginsberg’s The Fall of America: Poems of these States…

Listeners in North America can tune into U2 X-Radio this Friday, August 14th for the premiere of Gavin Friday’s new monthly radio show. The show, called “Gavin Friday presents” will kick off with A Tribute to Hal Willner, the great American music producer who passed away in April this year. Hal Willner was a friend…

AngelHeaded Hipster, the Hal Willner produced tribute album to the songs of Marc Bolan & T Rex, will be released on September 4th.  The double album features Gavin Friday on two songs: “The Leopards” “She was Born to be My Unicorn / Ride A White Swan” – with Maria McKee

Gavin Friday has recorded a version of The Fall’s 1981 song ‘Slates, Slags etc’ with the group Frigid Stars.  The recording will be presented as Gavin’s contribution to Always Different, Always The Same: a symposium on the band in Limerick, Ireland on November 7th. 2019. Frigid Stars are Eoin Devereux and David Meagher (both of…

Gavin Friday will join John Kelly on Lyric FM’s Mystery Train’s special Sunday service this week, October 6. Gavin’ll be picking all the records, his varied influences plus a look back over his own musical career. Tune into RTE LyricFM – Sunday October 6, 7-9 pm

Gavin Friday will be talking about Picasso’s painting “La Vie” on RTE’s art show “Arena” this coming Monday (June 3) on Radio 1, from 8-9pm. The theme of the show is “Blue”. He will also be reciting “A Blue Diamond Pill”, a poem by Jeremy Reeds and a teaser for a future release. Listen back…