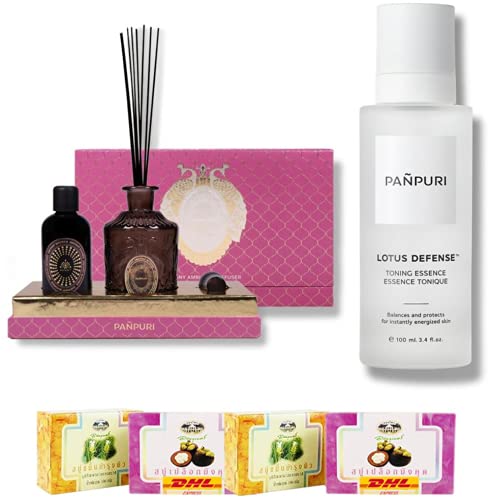 Infuses the air with a refreshing scent that invigorates the mind and spirit
Combining the sprightly blend of Australian eucalyptus and Thai mint with delectable floral notes, this botany ambiance diffuser set awakens the senses. Its enticing scent celebrates the essence of spring. Featuring an elegantly-shaped glass vessel hand-carved with the signature PAÑPURI peacock emblem.
Set includes:
- Glass Vessel
- Diffuser Oil
- 10 reed sticks
Benefits
Relaxes and enhances the home atmosphere.
How To Use
Fill 3/4 of the PAÑPURI diffuser glass vessel with the diffuser oil.
Reverse the sticks two to three times to
saturate. Sticks will absorb the oil
and diffuse scent.

On-the-go Illumination.
Travel with radiance in your pocket with this moisturizing Sacred Lotus and Aloe Vera water to replenish nutrients while keeping the skin smooth and shine-free throughout the day.
Fatigue and Irritation Barrier.
Layer your skin with a botanical veil of Glycofilm to block away dirt and pollution particles. Vitamin P stimulates micro-circulation, lessens dullness and minimizes signs of fatigue.Uplifting Mist.
Spritz on for instant moisture anytime with this alcohol-free, ultra-fine mist containing cooling hints of grapefruit zest to revive and uplift while keeping skin soft, healthy and hydrated.


Direction:
- Spray all over face, avoiding the eye area.
- Spread by gently tapping with fingertips.
- Use as often as needed for a quick on-the-go illumination.
Free tracking number with Express shipping.